The King of Crypto, als0 known as Bitcoin, has broken the $50k price ceiling with gusto and looks set to once again print new all-time highs on its path to $60k. At the time of writing, Bitcoin has set a new all-time high of $51,797 – Binance rate – with the possibility of making it to $53k or even $54k before the end of the week.

To note is that Bitcoin’s dominance has been dropping since the year began. The drop can be attributed to an influx of new capital from institutional investors focusing on Bitcoin and Ethereum. The new capital focusing on these two digital assets has allowed hodlers and seasoned traders to divert BTC and ETH profits towards alt-coins thus providing an ideal environment for them to thrive.

However, Bitcoin’s dominance is once again attempting to reclaim the crucial 63% area that could increase BTC’s hold on the crypto markets even further. As a result, the growth of alt-coins might be paused as focus and capital is diverted back to Bitcoin. The Bitcoin dominance chart below provides a visual cue of the situation. 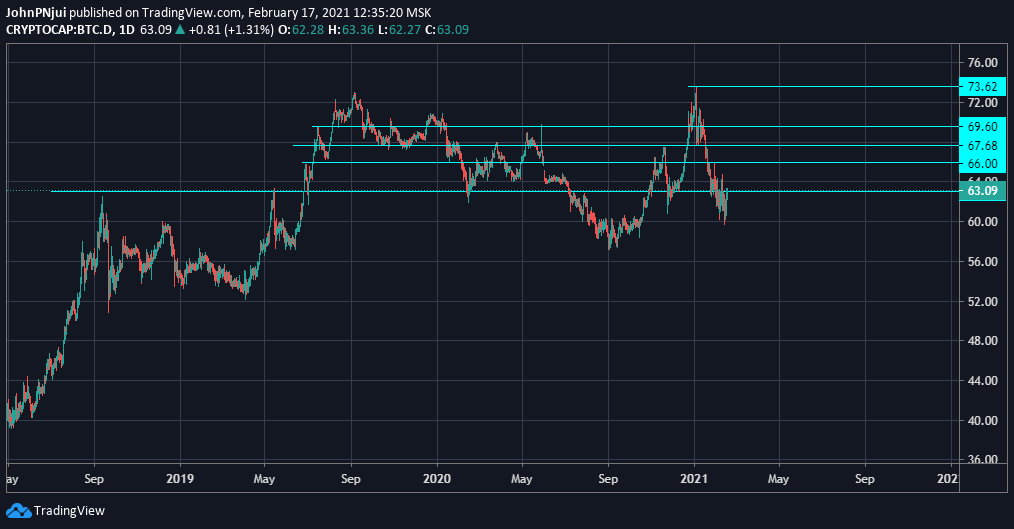 From the chart, it can be observed that Bitcoin reclaiming 63% will ultimately lead to a retest of the 66%, 67.68% and possibly the 69% area. Applying a bit of technical analysis allows for the identification of a possible head and shoulders pattern forming, with a genesis in September of 2020. Completion of this pattern implies that Bitcoin’s dominance revisits at least the $67.68% level.

However, the US is in the process of approving a $1.9 Trillion stimulus package that could see eligible Americans receive a minimum of $1,400 in COVID relief funds. Chances are high that a good percentage of the recipients of the stimulus checks will opt to purchase digital assets as was the case with the first stimulus check of $1,200.

The question now remains as to whether they will opt to buy Bitcoin with their stimulus checks, or take their chances with the vast selection of alt-coins. The selection of either option is still very bullish for BTC and the general crypto markets.