Here is an interesting project targeted at publicly tracking the purchases and value of the Bitcoin (BTC) held by the country of El Salvador or the Republic of El Salvador, a country that has made Bitcoin a legal tender on 8 June 2021 and since it has been purchasing Bitcoin on a government level thanks to its very proactive and pro-Bitcoin president Nayib Bukele. The El Salvador Bitcoin Portfolio Tracker does map the time an announcement has been made by the president that the country is purchasing Bitcoin and the price at which it was acquired and is also tracking the current total Bitcoins as well as their current value in USD and the total cost for acquiring them as well.

So, at the moment according to official data the country of El Salvador itself is supposedly owning 2408 BTC with a total value of a little over 40 Million USD at the current price of Bitcoin that is. According to the data of the unofficial user made tracker the cost of obtaining the little over 2000 Bitcoin is a little over 107 Million USD. So, currently El Salvador spent more USD to get their BTC reserve than it is worth at the moment, but instead of selling and thus losing money they are holding. Furthermore, the president of the country has publicly announced on November 18th that they are going to be buying 1BTC each day from then on.

– To check out the El Salvador’s Bitcoin Portfolio Tracker… 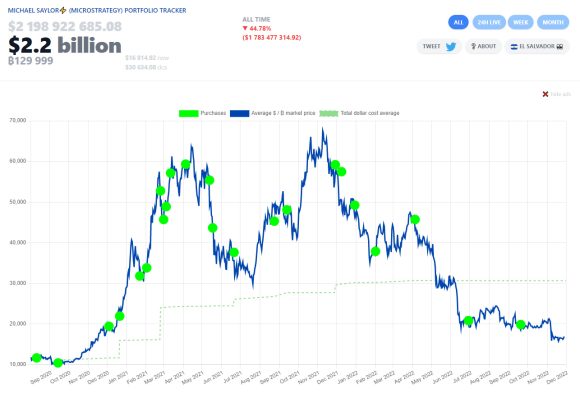 Apart from the El Salvador Bitcoin Portfolio Tracker, there is also one from the same author that tracks Microstrategy’s Bitcoin portfolio (Michael Saylor). This one is much larger in terms of Bitcoin currently held – 129999 BTC worth about 2.2 Billion USD at the moment. This one is down as well with the current price of Bitcoin, down from almost 4 Billion USD used for acquiring this staggering amount of BTC. Microstrategy is also not selling Bitcoin, even though they have slowed down the pace of their purchases with the last one being on September 20th. Talk about true Bitcoin believers…

– To check out the Microstrategy’s Bitcoin Portfolio Tracker…