Kaspa (KAS) has been doing great going up in price and attracting the attention of more miners as well as traders and investors and the project is still not listed on any of the large exchanges. Kaspa has the technology to evolve in one of the top Layer 1 crypto projects in the future and is one of the not that many Proof of Work based promising projects that could also bring back profitability for GPU miners. So, a reminder to check KAS out if you still haven’t done so already, don’t say we didn’t warn you. If you are a miner, then you should most definitely take a look at Kaspa and their GPU-heavy mining algorithm and probably get in early and start mining. Kaspa has a reduction of the mined coins every month and the difficulty is going up as more and more miners join. But now, let us focus more on mining Kaspa (KAS) and how you can optimize the settings of your Nvidia GPUs for optimal performance or for optimal efficiency looking at some of the more popular Nvidia GPUs used for mining.

We are going to be using the latest lolMiner 1.63 as mining software for the examples below, showing you the command lines and explaining what parameters to set and why. LolMiner is available for both Windows and Linux and is a part of most mining-based operating systems such as HiveOS, so you can still use the tips below although setting up additional parameters in a Linux-based mining OS might be a bit different compared to just running the mining software itself. Anyway, since KAS uses a GPU-heavy mining algorithm called kHeavyHash you don’t need a lot of video memory in terms of capacity or bandwidth, so even a bit older higher-end Nvidia GPUs can perform quite well in term of performance with surprisingly good power efficiency when properly tweaked. Alternatively, you can also Triple-mine ETC + ZIL + KAS (or another Ethash or ETChash crypto coin, not only Ethereum Classic) for optimized and more diversified mining portfolio. 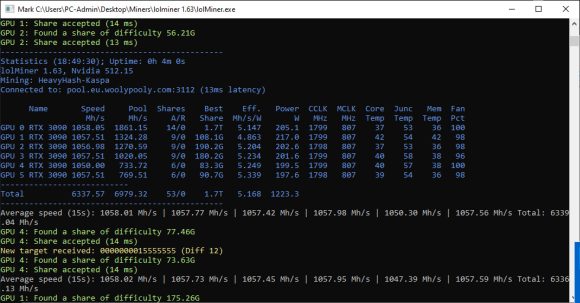 We are starting up with Nvidia GeForce RTX 3090 and what settings to use for optimal performance with reduced power usage. Since the RTX 3090 has a lot of high-speed GDDR6X video memory and you don’t need it for KAS mining we are going to lower the frequency as much as possible in order to save power (GDDR6X does use a lot of power) and significantly reduce the heat otherwise generated by the memory chips when mining crypto coins using memory-based algorithms. The same principle applies to other GPUs with GDDR6X video memory as well where more power savings can be achieved as compared to GDDR6 or older generation of video memory.

What does seem to work quite well for our test MSI Suprim X RTX 3900 cards in terms of performance optimized settings is a GPU clock fixed at 1800 MHz and video memory clock fixed at 807 MHz (the lowest setting we can get) set through the lolMiner command line (cclk and mclk parameters respectively). With these settings we are getting around 1060 MH/s hashrate from a single GPU with a power usage of about 200W per GPU, slightly varying even when using multiple of the same model video cards:

You can play with the core clock setting up or down a bit to optimize results in your particular case, but increasing the clock up from this point brings a little extra performance with significant increase in power usage, so going down can actually be more beneficial for significantly reducing the used power without that much of a performance drop. If you set the GPU at 1410 MHz and the video memory again at the lowest possible setting of 807 MHz you will be getting a much more power efficient mining with the RTX 3090s with a hashrate of 830 MH/s and power usage of just about 130 Watts:

Similar results can also be observed on Nvidia GeForce RTX 3080 GPUs where you can get significantly lower power usage if lowering the GDDR6X operating frequency of the video memory to the lowest possible setting, 810 MHz in this case. Here getting around 880 MH/s is possible with a GPU clock set at 1800 MHz and a power usage of about 190 Watts:

Moving on to the Nvidia GeForce GTX 1080 Ti, older, but still a popular mining GPU that can manage to perform quite well mining Kaspa (KAS) with low power usage. You can get around 470 MH/s hashrate for KAS with just about 120 Watts of power usage with a GPU clock of 1550 MHz and memory clocked at 810 MHz: