A few days ago, we have shared our First Impressions from the iPollo V1 Mini Ethash/ETChash ASIC Miner and now it is time to dig a little bit deeper into this compact and pretty powerful home-oriented miner. One of the first things that came to mind when we have opened this 300 MH/s Ethash/ETChash ASIC miner was how to try and make it silent while working. Nano Labs have made very good job in making this a very compact and sturdy device that is well built and works under even more adverse conditions. However due to the small size they made a lot of custom things inside the miner which makes it a bit of a problem to work around them trying to modify the device like when trying to make it silent yet cool.

We’ve already discussed the server style heatsink that is used that unfortunately is not any standard size for mounting on the ASIC chip and for cooling fans. The small and powerful 60mm cooling fans found inside are managing to keep the device cool, but making it a bit noisy even when they are running at sub 5000 RPM (they can go up to 7000 if needed). And if you want to use this at home in your living room or any other room where people will be present the noise level with the fans running at automatic mode keeping the miner at around 50 degrees Celsius will be noisy. So what can be done? 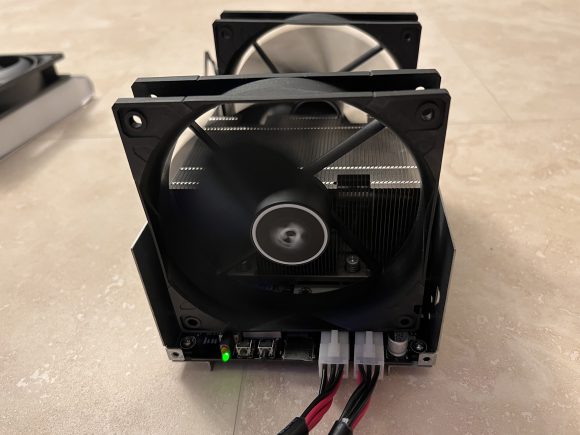 Two 60mm fans, how about replacing them with a single 120mm fan and will that keep things cool enough. Well, you can do it with a single 120mm fan, but you will have similar noisy miner just like with the default 60mm fans. The reason for that is that fins of the heatsink are only about 60mm tall, so essentially half of the 120mm fan will not be utilized thus half the efficiency. If you however do two 120mm silent fans such as Arctic Cooling F120 or P120 in a push-pull configuration on both sides of the heatsink you will manage to get a pretty silent operation and enough airflow to keep the miner cool at around the 50 degrees Celsius level. Unfortunately, the fan mounting is not very easy and you are still going to be wasting half of the fan’s airflow due to the low heatsink used by the miner. And another possible problem with this setup is when the ambient temperature rises above 25-30 degrees Celsius, it would be a problem for already maxed out F12/P12 fans to keep the ASIC operating at around 50 degrees C. 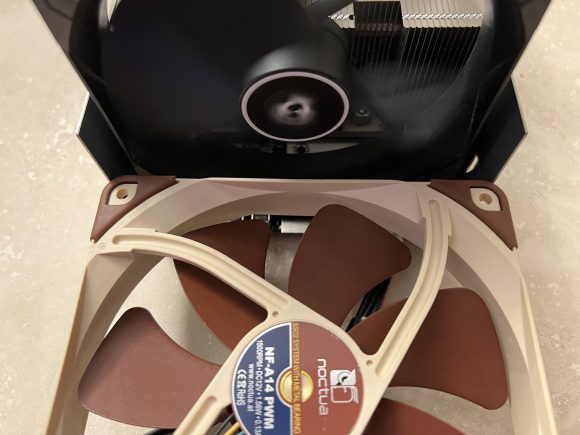 What comes to mind here is to use a larger 140mm fan instead with higher airflow and stack two of the iPollo miners on top of each other so that you will get the 140mm fan cover both miners and provide enough airflow. This should work pretty well in theory, though we are currently unable to test it as we only have one iPollo miner available. But there is another catch, the inside metal frame that holds the boards of the miner is just a bit shy of being able to properly fit a 140mm fan inside, so you need to remove the metal frame and that results in exposing a lot of the PCB. You would need to think of a custom case in order to secure things and it better be metal in order to prevent any possible interferences for the WiFi signal (if you are using the WiFi module). This could however work out very nicely in making a single 600 MH/s device cooled by a single or maybe dual Arctic Cooling P140 or Noctua NF-A14 fans (push-pull dual fan setup should work pretty well). We need to secure another iPollo miner to continue working on that idea, but if you have more than one such device already and are feeling up to the task you might work on it as well and share your results.

When we initially shared out first impressions from the iPollo V1 Mini Ethash/ETChash it did not work with Nicehash, but at pretty much the same time the platform has just announced that iPollo will actually work on their platform. All you had to do is add “--nicehash” (without the quotes) in the More Options field in the Miner Configuration page in the web interface. And do not forget to remove the option from there if you are switching to another mining pool as will not connect to other pools if you forget the option there. You can also try additional commands here that will be passed directly to the back-end miner software (more details on that below), however you cannot monitor the output from the mining software directly through the web-based interface of iPollo.

Another useful thing here is that the particular gold iPollo V1 Mini ASIC miner is equipped with 6GB of memory (the Classic series of V1 miners from iPollo are with just 4GB!), so you will be able to mine ETH with it. Furthermore, iPollo miners do support dual mining ETH/ETC and ZIL, so some extra profit if you are mining a compatible Ethash or ETChash coin along with Zilliqa. Check out this post on Dual Mining ETC, ETHW or ETHF plus ZIL For Better Profit if you have missed it, the 6GB iPollo miners are able to mine the ETH forks that split at the Merge when Ethereum switched from PoW to PoS as their DAGs are a bit over 5GB currently. 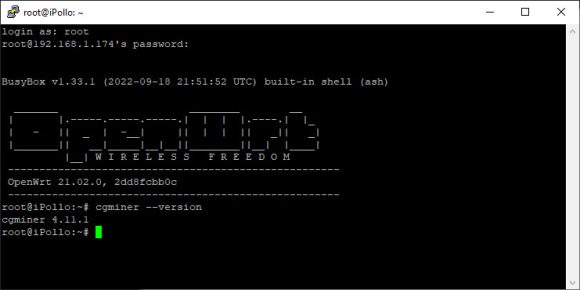 Further digging into the iPollo miner we connected to the device over SSH, it has full root access with root:root as username and password, so if you want to explore and play around with it you can get to it. We’ve quickly discovered that iPollo uses a modified version of cgminer so good news for anyone that is familiar with this old school miner and its wide array of options that can be used, but might not be implemented in the web interface of the device. There are some interesting extra commands available for the miner’s cgminer (note the nicehash option and the poolhub one), though they are not documented and the option for setting the voltage does not seem to work, but you might want to try to explore more, so here they are:

Here is the default command line that is used for dual-mining ETC + ZIL using the cgminer through SSH if you want to experiment and most of all to be able to see the full miner output… something that is kind of lacking in the web-based interface even though you have three different logs available for viewing:

Just make sure that you have you ETC_WALLET, ZIL_WALLET and WORKER_ID set in the command line above in order for the miner to actually start mining to your address. Also, since cgminer will probably already be running once you connect to the miner over SSH, just make sure to first stop it with “killall -9 cgminer” (without the quotes). There is a process monitor that will fire up cgminer if you don’t start it up for a while after you kill the process. Happy digging and don’t forget to share any interesting findings with the rest of us…